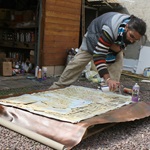 Regarded as the most talented stencil artist of his generation (according to the press), Artiste Ouvrier (AO) is an internationally acclaimed street artist with a career of over twenty years. Born in 1972 as Pierre-Benoit Dumont, the Paris-based French street artist known as Artiste Ouvrier (AO) has swiftly moved in to being one of the top stencil artists in the world. He is widely recognized for his refined hand-sprayed stencil works, which contain a high level of details and its vibrant colors. He is very much influenced by the art of the 19th century, in particular Pre-Raphaelite painting and the Art Nouveau. Not only AO is a master of his art, but the French Artist also executes a variety of different media art and installations such as on wood and canvas. AO murals and stencils can be seen throughout the Internet as a very popular street art search trend. Many movies and interviews are available. AO is a prolific street artist and has practiced his art in cities all over the world. His stencils may be seen in cities such as Paris, London, Barcelona, Naples, Berlin, Hambourg, Batumi, Tbilisi, Pondicherry, Bangkok, Takamatsu, and many more â¦ In addition to his street work - always legal or commissioned by municipalities or private corporations - AO also produces commercial artwork for galleries, commissioned work for private businesses such as stores or restaurants. AO has to date done a number of solo gallery shows to promote his work. He takes part in several initiatives such as Â« Stencil Project Â» which gazers great figures of Parisian street artists like BLEK LE RAT or JEF AEROSOL. And in 2008 he is invited to perform at Â« Canâs Festival Â» in London by BANKSY himself. AO is also often asked to participate to contemporary art shows, such as Â«Setouchi TriennaleÂ» in Japan (2016), Â«Batumi Street Art Festival Â» (2017) or Â«MuseumsQuartier Q21Â» in Vienna (2019). 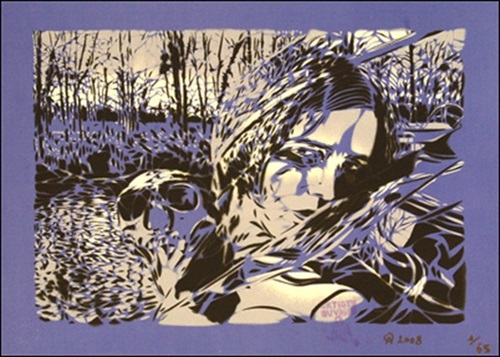